After breast reconstruction has been completed following mastectomy, most women prefer to complete the breast reconstruction with a nipple reconstruction. There are several methods all of which have certain advantages and disadvantages. As a rule, this is a minor outpatient procedure that may even be able to be performed in the office under local anesthesia. If there is enough skin and underlying soft tissue, you may be a suitable candidate for a flap reconstruction wherein a series of small incisions are created to allow for elevation of two or three small flaps of tissue are raised and sutured together to create a nipple.

Examples of Flap Reconstruction and Tattoo* 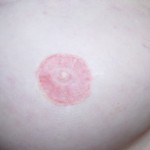 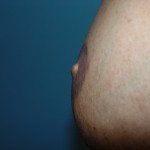 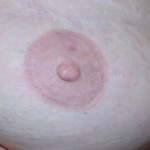 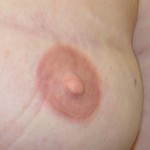 Alternatively, if the remaining nipple is of adequate size, a portion of this nipple can be borrowed as a graft and transplanted onto the reconstructed breast mound.

Example of Opposite Nipple Composite Graft and Tattoo*

This patient did not have adequate tissue in the skin of her breasts following mastectomies so her nipples were reconstructed with ear lobe composite grafts. One can see that the donor site has healed very acceptably with no visible scar.

Finally, if there is inadequate tissue either on the reconstructed breast, or if the opposite nipple is too small to be able to borrow from, a small wedge of ear lobe, or even labia, can be used as grafts. The earlobe heals with barely a visible scar and can be subsequently re-pierced. Once the nipple reconstruction has healed, the areola is generally created by use of a natural colored pigment which is used to create a nipple/areolar tattoo on the skin surrounding the nipple.

This last option can also be used to create a two dimensional nipple areola and this option is sometimes selected for women who have had bilateral mastectomies and wish to be able to wear clothing without a bra, and not feel self conscious about protruding nipples.

Example of Tattoo Only*

For more information about nipple reconstruction options, please contact our office to schedule an appointment for a consultation with one of our plastic surgeons.

“This is just a small token to say thank you so much for taking such good care of me during my breast reconstruction. From my first visit you made me feel confident in your attitude and the fact you saw the problem and had a plan. You really put my mind at ease and I knew I was in good hands. I love the way my breasts feel and look now.” Read More
*Individual results may vary. 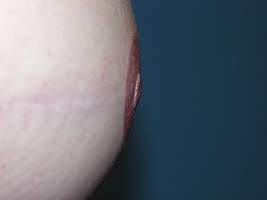 This Month, Help Us in the Fight Against Breast Cancer

October is Breast Cancer Awareness Month, a time for people around the world to learn and spread awareness about this... Continue Reading

Plastic Surgery of the Carolinas is thrilled to announce the opening of Shine Medical Spa! We are also excited to... Continue Reading